I have an extra special place in my heart for the special needs division. It doesn’t matter if it’s the team from our gym, or the team from another gym, my eyes fill with tears and my heart just swells with emotion. The pure joy that fills the mat with each of their eager smiling faces- I just don’t think one’s heart is meant to take in that intensity all at once, and so it overflows out our eyes and leaves trails down our cheeks. The fact that when a special needs team takes the floor everyone in the audience puts away their smart phones and iPads (unless they are using it to record the performance), the VIP section fills with uniforms from all different gyms busting at the ropes, and everyone in the competition arena becomes one and shows their support no matter what colors they are wearing or what program their child is cheering for. Each tumble pass and every stunt that goes up earns applause so loud that the floor vibrates beneath your feet, and when that final beat of the music stops there isn’t a dry eye in the house and not one butt left in a seat, as everyone jumps up in a standing ovation for what these amazing athlete’s have just achieved together as a team on that mat. It is truly breathtaking.

Many of the coaches and helpers behind these teams dedicate a lot of time, much of which may be volunteer time, into getting these athletes prepared for these moments. It takes a lot of commitment and patience from these individuals to make the program successful. Today while reading Hero’s Among Us, I came across an inspirational story about Morgan Brian, a young woman who has dedicated her time and passion of the sport of cheerleading into developing a special needs program in her community. This story touched my heart. What an impact she has made on the lives of these children and their families! 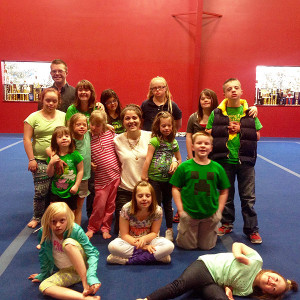 Article by: Cathy Free, People.com
As a high school cheerleader, Morgan Brian often stopped by her mom Kim Brian’s special needs classroom at Cyprus High School in Magna, Utah, to have lunch with her and interact with students who had learning disorders or Down syndrome.

While cheering for the Cyprus Pirates was a highlight of her teen years, “so were those afternoons talking to my mom and the kids in her class,” Morgan, now 23, of Bluffdale, Utah, tells PEOPLE.

“I really loved hanging out with them,” she says.

Six years later, Morgan is still shaking pom-poms and doing handsprings, only now she’s teaching 19 special needs children and young adults (all have Down syndrome except for a boy with autism) how to do simple cheerleading lifts and jumps and to dance in unison.

“I’ve always loved the team aspect of cheerleading – it’s a great way to make lasting friendships while getting some exercise and just having fun,” says Morgan.

“I thought, ‘Why not give kids with special needs the same opportunity?’ “ she says. “They have a lot of spirit, they’re energetic and they want to learn. It seemed like a natural fit.”

The Elite Academy Angels have won several local and national cheer competitions and are currently raising money to compete at the USA All Star Championships in Anaheim, California, on March 28 and 29.

Morgan, who coaches her special needs team every Tuesday night, is confident that the Angels will impress with their toe touches, kicks, cartwheels and somersaults.

“They work so hard – we’ve spent nearly a year on their routine,” says Morgan, who studies English literature at nearby Utah Valley University when she’s not coaching cheerleading.

“The key is to go over every little part, again and again, until they’re comfortable with it, before moving on,” she says.
Parents of Angels’ cheerleaders often tell Morgan that they searched for years for an enjoyable recreational activity for their children until they heard about her cheer squad.

“Because of my daughter’s disability, there have been issues and hardships in our experiences with typical dance programs,” says Kecia Cox, 36, of Murray, Utah, whose daughter, Bree, 8, has Down syndrome.

“But with this group, the barriers are taken down and the kids are able to just be themselves,” she says.

At Bree’s first competition, Cox says she was nervous, wondering how the audience would respond, “but then all these strangers stopped what they were doing to cheer our Angels on,” she says.

“For a few moments, these kids’ differences don’t matter – they’re just as able and accepted as anyone else,” she says. “The crowds are always brought to their feet and we are brought to tears.”

Brandy Christensen, mother of Kylee, 10, who has Down syndrome, says the kids always strive to do their best because of their special relationship with Morgan.

“Morgan is so patient – you can feel the love and compassion she gives to every one of her cheerleaders,” says Christensen, 35, of Riverton, Utah. “Cheerleading has helped Kylee to come out of her shell and shine.”

Adds Kylee, who has been cheering since last September: “My coach, Morgan, is nice and pretty and she’s my friend. I love cheer. Go Angels!”

Amber Rausch, whose son, Gavin, 10, has autism, says she saw a positive reaction in her son after just a few cheer sessions with Morgan.

“In the past, any activity we tried didn’t work out and Gavin had a difficult time making friends,” says Rausch, 33, of Kearns, Utah.

“But now, I’ve never seen him so happy,” she says. “This team has brought love and purpose into his life. I can’t say ‘thank you’ enough for that.”

Morgan says she hopes to recruit children with other disabilities to join the squad.

“I have a young woman with cerebral palsy who will start cheering next year and I’d love to teach some kids who are in wheelchairs,” she says.

For now, though, she’s just trying to get her current squad to the nationals – although it’s not about winning.

“When I see people on their feet in the stands, applauding and crying, it reminds me of why I did this,” she adds. “And when they all give me a big hug when they’re finished, there is honestly no greater reward.”