Leave it at the Door

There was a famous saying when I was a young athlete that is still used today- Leave it at the Door. We were expected to leave all outside issues outside the gym and be completely focused on the task at hand upon entering that door. It was an easy concept then. Those were the days. Our parents flew into the parking lot, hit the brakes without even putting the car in park most times, our doors flew open and we dashed into the gym and got ready to practice. No distractions. No internet. No social media. No tablets. No iPods. And most of all- No Cell Phones.

This day and age, nearly everyone has a phone attached to their hand, especially young people. There needs to be a time when these electronic devices are put away for the sake of focus and the sake of a break! There is nothing wrong with putting the outside world on hold for a few hours to put 100% effort into cheer practice, and that’s exactly what it takes- total commitment.

Here are some good Cell Phone policies to instill in your gym to help keep your athletes focused and safe.

Have a cell phone drop off station behind the reception desk, or in a very visible area out in the gym (to deter theft). Cell phones must be dropped off prior to the start of practice and not picked up until practice has concluded. No one should be checking their phone during bathroom breaks or drink breaks. All it takes is one cheerleader to check her social media account while standing in line at the drinking fountain and see that her boyfriend has dumped her via Facebook, and then she is heavily distracted and a liability the remainder of practice if she cannot focus. No phones until practice is over! 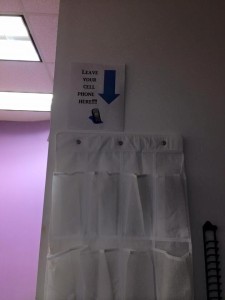 The Gym Phone should be used for emergency calls and general cheerleading communication purposes. Every gym should have a landline and most gyms also have a cell phone as an extra back up. Landlines are more reliable. Cell phones can be dropped and broken, the battery can die, the service can be disrupted, or one might accidentally spill their Starbucks on it. A landline is a must! All parents and cheerleaders should have this phone number programmed into their phone. If Suzy’s mom is going to be late- no prob, she can call the gym and let the secretary know without distracting Suzy. There is no need for Suzy’s mom to be calling Suzy’s cell phone and disrupting practice for the entire team. Whether the phone is on ring or vibrate, it can be heard and the noise is a distraction.

Issues during practice should be worked out by the team/coaches during practice. A team member isn’t keeping up in their section of the jumps or dance and they get moved to a different section in the back, or the last pass tumbler has been bailing for weeks and the decision has been made to move them to a different tumbling group. During the next drink break, the upset cheer princess runs over to her phone, before discussing it with her coach or having time to process her emotions and deal with the situation, texts Mom or Dad in an upset mess and you have a recipe for disaster. Fifteen minutes later a belligerent cheer mom or cheer dad with a distorted perception of the situation bursts into the gym, and quite possibly onto the mat, ready to defend their princess and demand she be put back into her previous placement. This is unacceptable. Children need to learn to handle their own problems and emotions and work them out with their coaches and their peers. It is a part of life. This is yet another reason cell phones should not be accessed during the hours of practice. Cheerleaders are not only there to learn how to make their toe touches soar and land their handsprings; they are there to learn life skills too.

Last, coaches need to lead by example. Coaches should be ‘checking in’ their cell phones too, and not accessing them during practice hours unless using their phone to video tape or for other training purposes. Video function still works while the phone is in Do Not Disturb or Airplane Mode, so it is a good idea to make use of these functions during coaching hours, and still have the flexibility of video recording.

http://www.heartofcheer.com/cheerleaders/leave-door/http://www.heartofcheer.com/wp-content/uploads/2015/04/cellphone2.gifhttp://www.heartofcheer.com/wp-content/uploads/2015/04/cellphone2-300x300.gif2015-04-29T14:02:49-04:00LeslieBlogCheerleadersCoachesParentsall star cheerleading,cell phones,cheer practice,cheer safety
There was a famous saying when I was a young athlete that is still used today- Leave it at the Door. We were expected to leave all outside issues outside the gym and be completely focused on the task at hand upon entering that door. It was an easy...
Leslie Phillipslmp1980@live.comAdministratorHeart of Cheer
Tagged in all star cheerleading cell phones cheer practice cheer safety