What I have Gained from Cheerleading

I have been involved in cheerleading since I was in the third grade, but stopped after high school when I went to college. Only recently have I started volunteering at the local gym as an assistant cheer coach, and I realized how much I had been missing everything about cheer – the comradery, the fun, the energy, the confidence and joy of being a part of a squad again, especially a squad that competes. The transition from cheerleader to cheer coach wasn’t hard like I thought it would be either. 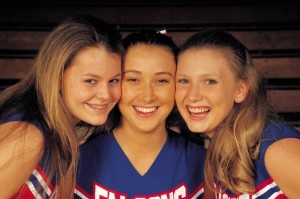 Being a cheerleader and being a coach are two different aspects of cheerleading, but I have gained so much from both of them. When I began cheerleading, I was a very shy eight year old. I didn’t know anyone, but I knew that I had always wanted to be a cheerleader and so I did it. I was one of the smaller girls on the squad, so I became a flyer. At first I was terrified of going into a full, but eventually became used to it and became really good at flying – staying tight in my motions and pinching that penny! I gained confidence that I don’t think I would have gained anywhere else. My teammates and coaches encouraged me to do my best and practice until I hit that motion or nailed that routine. It always felt great the first time a routine was finished completely, without any mistakes, and you could see how proud your coach was because you did your very best and they knew it.

I also gained leadership and public speaking skills. I was captain of my cheer squad for two years in high school. I was chosen by my coach and squad mates because I knew what I was doing, I was approachable and I helped others practice and learn the cheers, motions, jumps and routines. I had to learn to not be afraid to tell a squad mate that she was doing the motion wrong and help her to fix and perfect it. Cheering for the school’s sports teams, to a crowd of fans, you can’t be afraid of public speaking. You have to be loud and clear and proud and always smile. 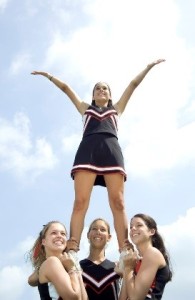 All of these things I have taken with me in everyday life and it helps me with coaching my squad of seven to nine year olds. At first I was afraid that I wouldn’t know what I was doing, but it was just like riding a bicycle. Everything just came back to me, not all at once, but everything I had learned, even cheers, started reappearing in my memory bank. I still knew how to hit that toe touch perfectly and could help the girls with their stunting. The first time I showed the girls how to do a toe touch their face lit up in awe and they asked me to do it again. It felt good knowing that my cheerleaders respected me and looked up to me because I knew what I was doing because I was once in their shoes. I am now the inspiration that my coaches were to me, and I guess that’s just the cycle of life. It sure feels great!

Veronica Ouellette is a coach at Middleburg Athletic Association in Middleburg, FL. This is her second year assistant coaching in Middleburg, but previously she spent about three years competing in Pop Warner cheer for the Sakonnet Schooners in Tiverton, RI and cheered at a non-competition level for middle and high school in Westport, MA. For her last two years of high school she was also the captain of her squad. She has a Bachelor of Arts in English: Writing, Communications, and Rhetoric and worked as an editorial assistant for a year for the Stamford Advocate in Stamford, CT. She has written many poems and short stories and has written for her own personal blog as well for many years.

Sources: All images are from Office.com Clip Art – royalty free photos and illustrations