Keep the Drama Llamas at Bay 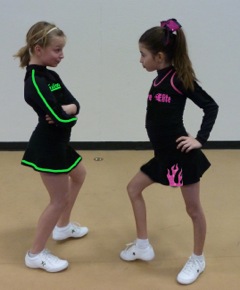 Dealing with Drama Llamas seems to come with the territory of running a cheer squad. Any time you get a bunch of leaders together you’re going to have clashing, and of course you’re coaching a bunch of cheerLEADERS!

Every year I think “This is the year that will be drama-free!” and every year I’m disappointed. It doesn’t matter if you have thirty team members or six, the Drama Monster is lurking in the shadows, waiting to pounce. Sometimes I wonder if I’m in the middle of some reality TV show. It’s not just the cheerleaders either, it’s the moms (and dads) as well!

I have come to the conclusion that we will NEVER be drama-free, but I can manage the situation when it arises. Here are a few tips I have for navigating through tricky situations.

• Try to reinforce to your team that outside problems stay outside of practice. It seems like young girls are fickle, loving each other one moment and hating each other the next. Remind them that their personal problems don’t belong in the gym.

• Come up with a list of behavioral expectation at the beginning of the year and make the team and their parents sign a “Cheer Constitution.” It should include all expectations and all consequences. This way when you have an issue, it’s clear that someone broke the agreement and it’s clear what the consequences are. This takes the emotion out of the situation.

• The physical well-being of your cheerleaders is paramount. If you feel that your cheerleaders aren’t concentrating because they are upset, then they shouldn’t be out on the floor because someone could get injured. If you have to sideline someone from practice, a game, or a competition then do it. It’s better to do that then to risk injury to one of your members.

• Try to be fair, but remember that life isn’t always fair. Remind your team of this. It is especially important in cheer competitions. The judges are humans and they make mistakes or maybe they just appreciated another squad’s routine over your own for their own reasons. Yelling at the coach, another team’s coach, the judges, or the competition staff isn’t going to change anything. It’s just going to make your team look bad. Remind your cheer parents of this! Before each competition, if necessary!

• As a coach, it’s easy to turn your attention to the areas that are making the most “noise” or “drama.” Sometimes the best course is to ignore the drama and to focus on the members of your team deserving of your attention. Drama Llamas thrive on attention. Don’t give it to them.

• If you need to take a few of your cheerleaders into a room and make them talk, then do it. Sometimes they just need to get it all out on the table. Yes, you’ll feel like a referee or a counselor, but sometimes that’s your job.

• Don’t neglect team building things throughout the year. Parties, outings, etc. are a great way to bond your team. This way, when things come unglued, it’s easier to put back together. It’s also good for the moms (and dads) to get to know one another as well.

• If the drama isn’t affecting your team directly, don’t get involved. Things usually resolve themselves quickly. When adults get involved, it tends to make the drama spread like wildfire. Kids are smart, they usually work through their issues—or forget about them! Like I said, they love each other one day, hate each other the next, and then love each other again! It’s enough to make one dizzy!

• If there seems to be one team member, or one mom (or dad), that seems to be either spreading the drama or making it worse all the time then you may need to rethink having them on your team. I can’t tell you how relieved I was when one team member chose not to be on our team the next year. I never noticed how much drama they sowed until they were gone.

• As a coach, understand that you do not have to tolerate drama on your team. It’s in everyone’s best interest that it is stopped right away. Cheerleading is supposed to be fun, and it is not fun for anyone if it is stressful. Don’t be afraid of losing the one or two Drama Llamas, you’ll lose more girls in the end if it’s not stopped!

You probably won’t have a drama-free year either, but you can keep the Drama Llamas at bay. Just make your expectations clear, run your team with a firm hand when necessary, and keep the focus on cheerleading!

http://www.heartofcheer.com/cheerleaders/keep-drama-llamas-bay/http://www.heartofcheer.com/wp-content/uploads/2015/05/cheerdrama1.jpeghttp://www.heartofcheer.com/wp-content/uploads/2015/05/cheerdrama1.jpeg2015-05-27T21:53:27-04:00Sunni WheelerBlogCheerleadersCoachesParentscheer drama,cheerleading,team bonding
Dealing with Drama Llamas seems to come with the territory of running a cheer squad. Any time you get a bunch of leaders together you’re going to have clashing, and of course you’re coaching a bunch of cheerLEADERS! Every year I think “This is the year that will be drama-free!”...
Sunni Wheeleracrobatsrock@gmail.comAuthorHeart of Cheer
Tagged in cheer drama cheerleading team bonding