Now is the Winter of our Discontent

While most of the country remained paralyzed by record breaking snow storms, school and job closings, plane cancellations and delays, as well as traveling across treacherous roads and highways, the cheer world hobbled through its weekly jammed-packed competition season. Day-after-day and week-after-week, parents perused weather forecasts, exchanged stories of ‘last year’s snow storm’ or ‘the storm from the year before’ hoping for a possible cancellation, but knowing full well the likelihood of a cancelled competition is next to impossible. Without missing a beat, parents forge ahead, they continued to clean uniforms, prepare cheer bags and anticipate the worst.

During this time, parents, athletes and coaches in the cold weather collectively looked forward to nationals in warmer parts of the country, only to end up stranded at the airport either on the way to or from the warm weather competition. In addition, those few ‘excused’ absences parents set aside each year for that Friday before the big national in Dallas or that recovery Monday after the huge one in Florida, were virtually wiped away as school closing began to mount up 2 and 3 per week. What are cheer parents to do? This leads me to pose this two part question:

(1) Why is the majority cheer competition season during the winter months and during; and 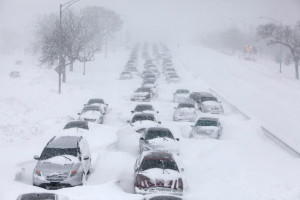 The stresses of managing carpools to mandatory practices and 2 hour road trips to away competitions was stretched to the limit this year as parents defied well meaning family, friends and co-workers (and shear common sense) to brave unplowed roads to meet the demands of the season and the commitment to the team. Of course, only other cheer parents understand risking life and limb for cheerleading. Our love for the sport, the team, the kids, the gym and the other parents won’t allow us to give up, so we trek forward to the next competition, wishing and dreaming for warm weather and Disney vacations. (I remember driving down the NJ Parkway to a competition during a snow storm without telling my family or friends. The word ‘crazy’ went through my mind many times. I drove and prayed and prayed and drove watching overturned cars and I began to think, why can’t we do this in the summer?!)

Along with the wretched winter weather is the juggling act parents play with missed days at school. As competition season comes in to full swing, so do the demands of school, that other activity that tends to stand in the way of cheer! Why are standardized tests, ACT, SAT, midterms, finals and parent teacher conferences always inconveniently scheduled during the most important practices and competitions of the year? It’s been my experience that the patience of teachers and administrators generally wears thin by the time Cheersport rolls around. (Don’t you think?). Little do they know, at that point, we have months to go and there will be more missed days because who will miss NCA in Dallas, the Summit or Worlds for the sake of a test? (Once, I was scolded by the nuns at my daughter’s school for putting her in activity that had ‘no regard for her educational pursuits!’ I had to hide the fact that she cheered the next year, only to be outed by someone seeing a picture of her in a national championship jacket on Facebook. In order to get an excuse for her to go to Words in 2012, I had to lie and tell them she was a participant and it was the Olympics of cheerleading! If I told them we were going as spectators, I fear those nuns would have punished me severely!!) Aren’t we parents under enough stress? Coming up with fresh and unique reasons to miss school is exhausting and takes a level of creativity the cheer parent no longer possess during the months of March and April!!

I’m aware that in other parts of the country competitions are held in the summer, yet the majority of the most prestigious are held between January and April. The ‘off season” of cheer is usually only a 2 week period in early May. The athletes and parents have those 2 weeks to see how non-cheer friends and family live the other 50 weeks of the year. It’s a very lovely 2 weeks filled with naps, leisurely rides home from work, home made dinner and outings with non-cheer friends. However, Week 3 comes quickly and with a vengeance! Week 3 means: TRYOUTS, what team did you make, summer privates, camp, choreography and here we go again!! (Speaking of those 2 weeks, anyone else ever have a time explaining, after 11 months of missing every family event, non-cheer friend’s sleepovers, birthday parties, weddings, after tons of pictures, video, updates of your child’s progression, weekly updates of each team’s victory in the gym and finally the tearful banquet, that in 10 days the seasons starts, all over again? Not an easy task! )

Taking all the weather and school issues into consideration, my remedy is a super summer cheer competition season. A weather and school friendly cheer season would be the answer to a cheer parent’s dream. Those extra practices before the big nationals would no longer interfere with homework and school projects. No need to fret and fear calling the school with yet another fake illness. Watching snow clouds like a meteorologist would be a thing of the past. 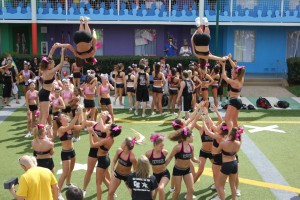 Why can’t the competition portion be juggled, nudged or full out moved to the summer, who would it hurt? My imaginary summer cheer schedule will look a little like this:

I’m sure there are many other factors to take into consideration, perhaps the venues are more expensive in the summer, overcrowding at Disney would be a concern. Yes, my summer cheer schedule is bypass for teams in the Northeast as most of us begin school after Labor Day. Yes, the weather in the south is scorching during the summer months, but at least there will never be a blizzard for any local competition!

This is all for fun! Parents please share some of your ‘interesting’ weather and/or school related cheer stories and/or how a summer competition schedule would affect your family?

Thank you for reading. Take care and God bless!