The Disease of Me

“Tryouts…..Boy, do I love/hate this time of the year.  Parents who think now that my child has a tuck they are on a level 3 team and if not then we will go elsewhere.  I am wondering if there is anything that explains what it takes for a child to typically move up from level to level. I also get the "I want to be a senior 3 not a junior 3" statement a lot. It gets so frustrating during this time of year.”

These are the sentiments of coaches all over the cheer industry!  The time of year that they start looking at the next season’s teams. . .  And the parents start “jockeying for position” for their athletes.  As a parent I hate it because I see some pretty normal people turn into Wanda Holloway (Google moment. . .).  They are threatening to take their kids elsewhere if they don’t make a certain team.  They go onto Facebook and start throwing out cryptic statuses and being frustrated and disappointed, or complaining that the deck is stacked because they didn’t do something to “gain favor”.  They contact coaches at home or on their personal cell phones and try to “plead the case” why Suzie Youth should be on the Junior team.  What a nightmare!

Worse yet – at a time of year that should be new and exciting, most coaches and gym owners have dread in the pit of their stomach because they know that there WILL be (not “might be” but “will be”) some sort of athlete/parent drama over a placement that for whatever reason is not agreed with.  “But my child is obviously a great tumbler!  Why is she not on the Level 3 team?” 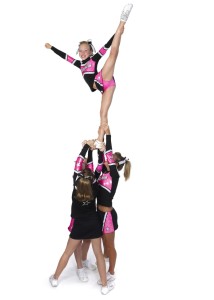 Coaches have a lot to look at when creating their team.  Their job is not to place all of the qualified Level 3 athletes onto the Level 3 team, but rather to find the TOP Level 3 athletes to COMPETE against other gyms’ TOP Level 3 athletes.  They need to find the perfect combination of bases, flyers and back spots that can tumble Level 3 skills so they can beat the other teams they will compete against.  They need the athletes that will not only commit fully to the team, but don’t cause issues or drama and that will pull all of their tumbling/stunts, and will give the team the edge so they win.  Just because an athlete can tumble at a Level 3 does NOT mean they belong on a Level 3 team.  They might only have 22 spots, and your athlete might be the 23rd best Level 3 tumbler.  Facts are facts – if there isn’t a place for the athlete, you can’t expect the coach to create a spot for the athlete.  That is not how teams win at competition.  They win by putting their best against other gyms’ best.  Does anyone actually think that ANY Level 5 athlete that walks into a World’s gym ends up on the gym’s Worlds team automatically?  Not on your life.  So why should that be a different story with any other level athlete?

I am a parent, and I get when we want our child to be the best and to excel at what they are doing.  I do get it.  But when does the good of the many outweigh the good of the one?  A team is that – the good of the team outweighs the good of the individual.  That is what being a part of a team is about.  A good coach knows that you think of the whole; not the units in the whole.  Sure – you nurture the athletes and teach them.  You develop them into the best athletes they can be.  But you do it with the entire team.  If one athlete isn’t working out, you give them a chance to fix it and if they can’t, you replace them with another athlete that will do what needs to be done.

Pat Riley – the NBA Hall-Of-Fame coach from the Los Angeles Lakers, Miami Heat, and other teams – wrote a book years ago called “The Winner Within”.  It is written to convey the ideas needed to manage a team.  Coaching is much like managing, and all a team is are people working towards the same common goal; whether it is in the world of business, industry, or athletics.  Coach Riley talks about something that he refers to as “the disease of me”, which those that contribute 20% of the results feels like they deserve 80% of the rewards.  It is something I see all too often in business, sports, and life in general.  I have heard the employee stating that they will take all of the business with them when they leave, and come to find out that never happened.  I remember when I was the general manager of a sporting goods store early in my life.  There was a man that worked there – a very nice man, very fatherly and warm – and had worked there so long he knew EVERYTHING.  He knew all of the coaches all over the state.  When people would call with technical questions, he was the “go to guy”.  He was amazing, and knew all of the “tricks of the trade”.  The day he left I told the owner I was petrified that the store was going to close because no one was going to come in any longer.  The woman (who I saw as a mentor and an amazing business woman) made a statement to me that to this day I use:  “Everyone is replaceable”.  When she said it to me, I felt she was wrong in this instance.  The business would fold, and she would see how wrong she truly was.

The business didn’t close.  Matter of fact, the opposite happened.  The business thrived.  I was amazed by this, but it did because when the man left, as amazing as he was, he didn’t do everything perfectly.  He was continually off on inventory (bad counts and outside theft), he priced things too low, preventing the business from making the money it should have been, and with him dealing with all of the coaches, they missed out on the newest and best of the sports equipment because he was busy giving them the same old stuff they were used to ordering instead of sharing with them how a new product could be beneficial.

My point on all of this is that athletes (and parents) need to understand that everyone has a place on the team, and the coach places them where they are best utilized.  Threatening to leave a program isn’t going to do anything you think it will do.  In most instances the whole will survive – and thrive – with the loss.  Some athletes and families will be missed more than others, but everyone is replaceable; right up to the owner of the business themselves.  If a gym owner decided to sell their gym, another would purchase it and it would go on.  That is life in general.  That is one thing that athletes and parents need to remember in placements.

The other thing that Pat Riley writes about in his book is “Complacency”.  He writes that it is “the Success Disease:  it takes root when you’re feeling good about who you are and what you’ve achieved.”  How you can look at that in the team dynamic is the athlete that makes the higher team that they had worked hard to get to. . .  and then does nothing.  How many athletes in how many gyms are like that?  They get their tuck and suddenly they are it, and don’t work to get anything else.  There are athletes like that all over the nation in gyms everywhere.  You could go further and state that there are GYMS that are like that – they fought to get to where they are nationally (or internationally), and they don’t get better.  The team just does enough to keep what they have instead of continuing to grow and evolve.  These athletes are not any good to a team dynamic.  They don’t better a team at all; they actually bring it down in the end.  That is the other place it is important to make sure that every athlete works hard for their spot and works to keep it.

That is where the value is in taking only the best of the level; not every athlete that can achieve the level.  Fact is that not everyone can be the best, hence that is why teams hold placements and try-outs.  This is the fact in any and every sport played, just as it is in life.  When you go interview for a job, the employer doesn’t hire every person interviewed that is qualified for the position; they hire the number that they need to complete their team.  And the ones they hire are the ones they feel are the best of the group presented.  Everyone does not always “make the cut” and that is where athletes and parents need to understand the plight of the coach. 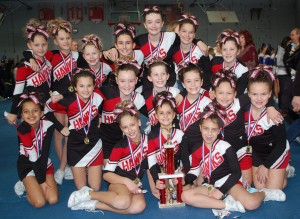 So when try outs and placements hit, don’t give the coaches a hard time.  Don’t call and yell at the coach and fight for your athlete to get on the team they “want” to be on.  Support the decision and teach the athlete how to work with the coach and find out what needs to be done to gain what is needed to get where they want to be.  That is what a great athlete does – they work and they grow and continue to grow.  But if mommy and daddy go and give them whatever they want (which we all want to do), that only teaches our children that you don’t have to work for what you want; if you yell loud enough, you will get what you want.  “The Squeaky Wheel Always Gets Greased” is how the saying goes.  I had a fellow manager that had a plaque on his office door that said, “The Squeaky Wheel Doesn’t Always Get Greased; Sometimes it Gets Replaced”.  That is a great lesson for life and for sports.  Teach that to our athletes and the stress of the coaches will go down significantly.

http://www.heartofcheer.com/cheerleaders/disease/http://www.heartofcheer.com/wp-content/uploads/2014/06/disease3.jpghttp://www.heartofcheer.com/wp-content/uploads/2014/06/disease3-150x129.jpg2014-06-13T15:26:15-04:00Pam SBlogCheerleadersEducationIndustryParentscheerleading,Coaching,Disease of Me,Placements,Team,The Best,Try outs
“Tryouts.....Boy, do I love/hate this time of the year.  Parents who think now that my child has a tuck they are on a level 3 team and if not then we will go elsewhere.  I am wondering if there is anything that explains what it...
Pam Swopepswope.stormeliteallstars@gmail.comAdministratorOne of the founders of iCheer, I am excited to bring the positive and inspiring parts of cheer that I see all the time to the masses! We continually hear about the drama and the negative; well here we are to show you the Heart Of Cheer!!!Heart of Cheer
Tagged in cheerleading Coaching Disease of Me Placements Team The Best Try outs